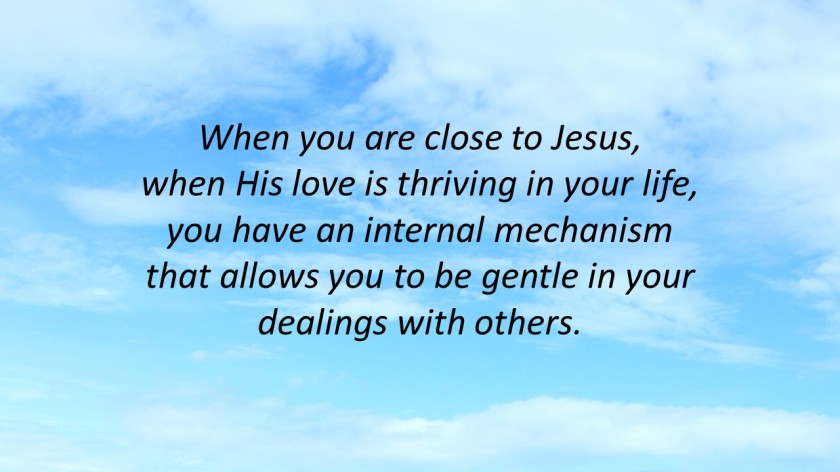 I’m the rabble rouser.  I have enough grit and mettle for all of the Twelve. I wear my emotions on my sleeve. It doesn’t take much to really tick me off or to make me happy. And right now, as I reflect on the events of the past couple of months, I’m so amazed and full of great joy because of my Lord and my friend, Jesus.

The thing that sticks out the most to me, ever since the Passover, is His gentleness. It started that night. It was my job to wash everyone’s feet when they entered the room. But the week had been crazy. The people shouted along a great parade for Him as he entered town a few days earlier. He had sent some of us ahead to prepare for the Feast. When we all sat down we were exhausted and distracted as the Romans were not too pleased with procession and the recent activities of His followers. Anyway, as the servant for the evening, I was supposed to wash everyone’s feet… but He did it. Our Lord the King! Stooping with humility and gentleness.  I arrogantly protested that He’d never wash MY feet. And then with His one sentence reply, I flip-flopped faster than Herod or any other politician and insisted that He wash all of me! I proclaimed that I was all-in! No one or nothing could cause me to ever leave His side, vowing “I’d lay down my life for you!”

He shook His head, furrowed His brow and predicted my betrayal. “Why, I’ll show Him!” I stubbornly said to myself. Just an hour later, in the Garden, I had my chance. When they came to arrest Jesus, and only Jesus, I drew my sword and attacked one of those with the soldiers! The Master’s gentleness towards our Roman enemy, and His admonishment of my actions, greatly perplexed me.

Three times that very night I had the opportunity to stand up for Jesus… to show the world that I would, indeed, follow Him to the ends of the earth, or to death… And all three times, I bailed on Him… I denied I even knew Him.

Oh, how He knew me better than I knew myself.

The agony continued into the night and as the sun rose on the new day… The trials, the long march to Golgotha, the pain of His crucifixion and death. And through it all, Jesus was like this gentle giant, letting it all play out as He had predicted. He was calm and temperate, yet exuded this amazing strength. Soldiers mocked Him. People spat on Him. Rulers belittled Him. Executioners killed Him.

For two days we were all dejected and hope was hard to find. Then, at dawn on the first day of the week, the women went to the tomb after the Sabbath, and His body was not there! Could it be? Was He alive? The joy we felt – and the fear we were experiencing – was this emotional fisticuffs in each of our hearts.

Jesus did appear to all of us on multiple occasions… each time with the gentle greeting: “Peace be to you!” Then, He was gone again.

Days past. We wondered what was next. Would He return? Feeling lost and aimless, I decided to go back to doing what I knew best… fishing. Although, my heart wasn’t in it. Where did He go? What were we supposed to do? All night my mind was racing as I merely went through the motions of throwing the nets overboard, and pulling them back in… empty. We caught nothing. Not even a single minnow.

At day break, we saw Jesus on the shore. Although we didn’t know it was Him at first. He called out to us and told us to once more throw our nets out, this time on the other side of the boat. I thought, “What difference does it make? Right side? Left side? We’re in a boat!” Hesitantly, we followed His friendly advice. And, believe it or not, we caught the most fish in a single net ever! At that moment, we recognized it was the Master!

When we landed on shore and sorted it all out, our hearts were overfilled with great joy! We laughed and cried together as we ate a breakfast that He had kindly prepared for us. And we shared stories of the past week or so. Here was our Lord, our friend, Jesus, just as we knew Him to be.

He took me aside, away from the warm campfire. With much more gentleness than I deserved, He asked me if I loved Him. “Of course I do,” I said. A second time He queried. “Lord, you know that I love you.”  A third time he gently pressed: “Peter, do you love me?”  I was hurt because I felt like I had to defend myself. But He wasn’t angry with me. His eyes expressed great love and deep compassion. And then it hit me and I fell to my knees. Three times He asked… three times I had denied I knew Him. He had to make sure! And I said: “Yes! Yes, Lord! You know me. You know all things! You know that I love you!” And one more time He said, “Follow me.”

I’m pleased to tell you that I have been following Him ever since. We celebrated Pentecost last week. Wow! The Holy Spirit, which Jesus promised would come, showed up in power. We baptized 3,000 people after I spoke that day! Jesus, even after He has gone up to heaven, is so gentle. He loves these people so very much; He has moved in their hearts, as He moved in mine.

So, my friends, I will always be ready to share the hope I have in Jesus. And I will endeavor to do so with the gentleness and respect that our Lord modeled for each one of us. And if I must suffer, I will suffer for doing good, not evil. And I am confident that I will receive a rich welcome into His eternal kingdom.

Some of the words, actions and, perhaps, thoughts of the Apostle Peter, as recorded in the Gospel of John, in Acts Chapter 2 and in 1st Peter.

This is the opening to a sermon from Oak Hills Church, North Central Campus. The video of the entire message is here: http://vimeo.com/161831718

Husband. Dad. Son. Brother. Television News Man-turned-Marketing Executive-turned-Pastor. Encourager. In the parable of the talents in Matthew 25, two of the three servants successfully multiplied the number of talents given them. But the Master didn't say "well done, good and successful servant." He DID say, "Well done, good and faithful servant." My prayer is that I will be found to have been faithful. -Rich Ronald View all posts by richlyspeaking