The Gift of Grace

This Advent Daily Devotional is focusing on the gifts God gives us, as uncovered in the book of Ephesians. 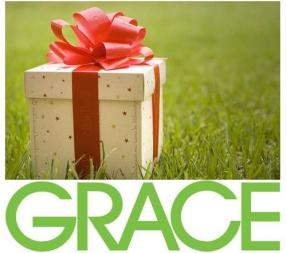 What is grace besides the prayer often offered before a meal?  Grace is a gift.  And it often looks different depending upon who is using the gift.

But to each one of us grace has been given as Christ apportioned it.  (NIV)

But that doesn’t mean you should all look and speak and act the same. Out of the generosity of Christ, each of us is given his own gift. (The Message)

Some have suggested that no single man sums up the definition of grace like the man behind the song “Amazing Grace” … John Newton.  Do you know his story?  He was a slave trader, the captain of a ship in the mid 1700’s that regularly travelled the Triangle Trade Route.  Beginning with an empty cargo hold in England, he would travel to Africa and pack over 600 units of “human cargo” – slaves – onto the ship.  He would then sail to America and deliver his cargo in exchange for money and goods made in America that were needed in England where he would conclude for a short season and start all over again.  He met Christ during a terrible tempest aboard his vessel.  He ultimately left the sea and studied for the ministry.  Near the end of his life he was pastor at the Saint Peter and Paul Church of England in Olney Parish.    At age 82, Newton said, “My memory is nearly gone, but I remember two things:  that I am a great sinner, and that Christ is a great Savior.”[2] He is buried in the cemetery there.  On his tombstone reads these words:

John Newton, Clerk, once an infidel and libertine, a servant of slaves inAfrica, was, by the rich mercy of our Lord and Saviour Jesus Christ, preserved, restored, pardoned, and appointed to preach the faith he had long labored to destroy.

Amazing Grace!  What a gift!

May you be a recipient and a giver of this gift today.

Father God, thank for the Gift of Grace.  Thank you for the chance to start over again no matter how often.  Thank you that I can receive your love new and fresh day after day after day.  As you have given me grace, may I be quick to offer it to others.  In Jesus’ name, Amen.